Hanayamata Wiki
Register
Don't have an account?
Sign In
Advertisement
in: Characters, Female Characters, A to Z,
and 5 more

Edit
watch 01:40
The Sandman Will Keep You Awake - The Loop
Do you like this video?
Play Sound

Whilst generally strict, Machi is particularly weak to sweet things, as well as Tami Nishimikado's general requests. She is initially hostile towards Sally for leaving home, but she soon comes to understand her true feelings and joins the yosakoi club. 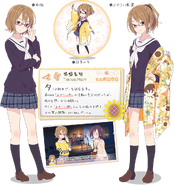